How to Garden › The Importance of Growing Milkweed

The Importance of Growing Milkweed 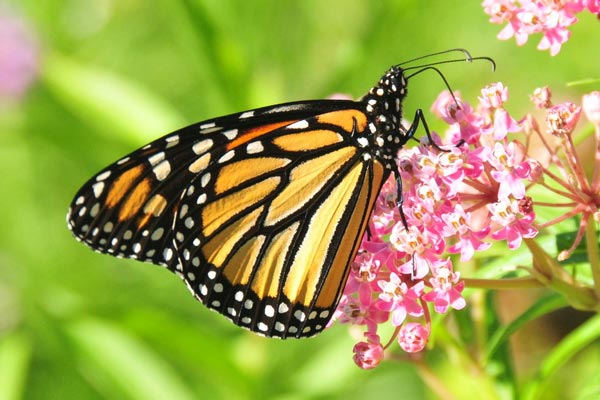 For those who grew up spending a lot of time outdoors in nature, the mention of milkweed may conjure up childhood memories of playing in open fields colonized with riotous collections of untamed, native plants. The favorite among them may have been the milkweed with its strange pods bursting with…come to think of it, what WAS that silky stuff that floated off into the air when you blew on it?

Casual observers who happen upon milkweed today may admire the plants’ fragrant, intricately-patterned, pink flowers accenting the late summer goldenrod display, but they may not fully appreciate the importance of their role in the environment. Milkweed plants serve as an important food source for a number of insect species that help keep nature in balance as well as pollinate some of our most important crops. But native milkweed is also the key to the survival of the iconic and endangered monarch butterfly (Danaus plexippus).

Unfortunately, as more and more open space succumbs to development, milkweed isn’t as ubiquitous as it once was, contributing to the decline of the monarch population and other, less-celebrated insect species. The good news is that gardeners can help reverse the trend by planting native milkweed in their backyards. 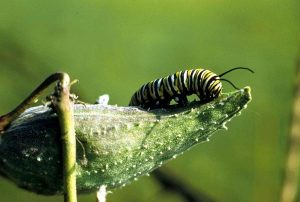 While beneficial insects and pollinators snack on a wide variety of plants and flowers, monarch butterflies seek out milkweed as a host for their eggs because it’s the only plant their larvae will eat. Migrating monarch butterflies deposit their eggs on milkweed plants in the spring on their return trip home to various regions of the U.S. from their overwintering site in Mexico. The eggs hatch into baby caterpillars that voraciously consume the milkweed plant leaves, quickly metamorphosing into butterflies and flying away to continue the cycle of life.

Mother Nature created an ingeniously symbiotic relationship between some insects, such as monarch caterpillars, and milkweed plants. Milkweed contains a substance that is toxic to most insects and animals when ingested. But, for other species—like the monarch caterpillar, for example—the chemical compound is not toxic; they store the compounds in their tissue, rendering them toxic to potential predators, aiding their survival. 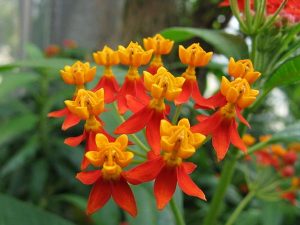 Unfortunately, the marvelous system described above only works with native milkweed, not the increasingly-ubiquitous tropical milkweed. This non-native milkweed—Asclepias curassavica—also known as Mexican butterfly weed, has become popular in recent years among gardeners in warm regions of the country. Its popularity is due to the fact that it’s attractive, fast growing, and attracts monarch butterflies, but isn’t as unruly or invasive as native milkweed. The problem is because this milkweed doesn’t go dormant in winter, producing flowers continuously all year, it attracts monarch butterflies, even when it’s not seasonally-appropriate. This upsets their breeding and life-cycle.

In addition, because tropical milkweed is available to snack on all year long, monarchs and other butterflies are not motivated to continue their migration to find other food sources. The result is the same toxic compounds that help keep the caterpillars and butterflies safe, builds up and becomes lethal, contributing to the decline of the overall butterfly population. Thus, gardeners are encouraged to cut tropical milkweed to the ground a few times each season, forcing the monarchs to move on, or, better yet, plant native milkweed.

There are various species of native Milkweed—Asclepias—that grow in different regions of the U.S. and bloom at different times:

Milkweed is easy to grow from seed and requires relatively little maintenance. And, of course, gardeners want to avoid applying pesticides or insecticides, which would defeat the purpose of growing milkweed.

By the way, in addition to serving as a critical habitat and food source for important insects that benefit our environment, milkweed has had other important historical uses. For example, its sap—which is so toxic to certain animal and insect species as described above, while also toxic to humans in large quantities—was used by Native Americans for medicinal purposes, along with other parts of the plants. It was also used in cooking and as fiber for bow strings, fishing line, thread and belts. 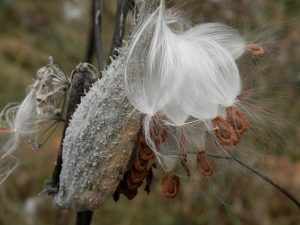 And, looping back to the question of the silky contents of the milkweed seed pods. While we may have goofed around with them as kids, blowing them at each other, they actually played an important historical role in World War II. The waterproof and buoyant silky seeds were used as filling for critically-needed flotation devices after the Japanese cut off the supply of kapok, a plant fiber previously used for that purpose. In essence, milkweed helped win the war!

So, next time you’re thinking about what to plant in bare spaces of your yard, consider planting milkweed seeds. They will require little work and will pay off in the long run. They do tend to sprawl and spread so make sure you give them plenty of room. The more the merrier, right?