How to Make Well-Drained Soil for Growing Vegetables 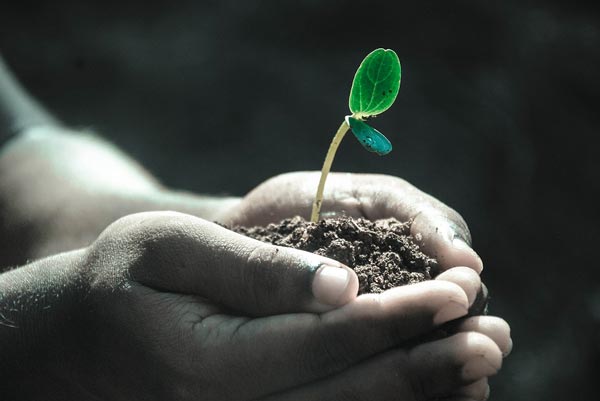 With any new occupation or hobby, there’s always a lot to learn, oftentimes including new lingo—which can be intimidating, for sure. The world of gardening is no different. The planting instructions listed the back of your seed packets, for example, can almost seem like a foreign language at first, making the whole process feel much more complicated than it actually is. One common phrase is particularly daunting: ‘plant in well-drained soil’. It’s obviously really important. But what does it mean and how do you do it? We will explain.

The process of growing plants from seed is simple, in concept. You plant the seed in a growing medium (which, for purposes of this post, we’ll say is soil) and add some water which will stimulate the seed to germinate or sprout, assuming the soil temperature is in right range. A seed’s initial growth is driven by respiration which is fueled by water and air held in the soil. If the soil contains too much of either—as a result of over- or under-watering – the seed can’t germinate.

Under the right conditions, as a plant germinates from seed, the tiny root previously stored within the seed grows downward in the soil serving as an anchor root. This root enables the sprout to start absorbing water and nutrients from the soil, which, in turn, drives the emergence and growth of the seedling above ground. As the seedling grows, it puts down more roots and the cycle continues.

In reality, problems can occur if the soil doesn’t serve as an hospitable medium for growth, either because it lacks appropriate moisture or because it doesn’t provide the nutrients the plant needs to grow. This can happen if the nature of the soil renders it unable to hold and exchange nutrients with the plant. THIS is where the concept of ‘enriched, well-drained soil’ comes into play. Soil that is too dense to allow unimpeded passage of water, nutrients, organisms—and roots—won’t properly support varied plant life. But soil that’s not dense enough to hold water and nutrients is also not conducive for growing plants either. So, the question is what is the nature of YOUR garden soil and what amendments, if any, do you need to make?

What is Soil Made of?

Soil is composed of three elements: minerals, decaying organic material, and living organisms. The minerals are a mixture of sand, silt, and clay that come from the ongoing, millenia-old breakdown of the solid rock that layers the Earth. The decaying, organic material consists of leaves and plant remains; the living organisms include fungi, nematodes, earthworms, ants, moles, etc.

The proportions and chemical makeup of these soil elements vary enormously from region to region, resulting in soil textures that range from fine sand to heavy clay. Neither of those extremes is ideal for gardening; most plants do best in soil that’s a balanced mix: 40 percent sand, 40 percent silt, and 20 percent clay. A well-balanced soil blend is often referred to as loam.

How to Determine Your Soil Type

With dampened soil, grab a handful and rub it between your fingers: if it feels gritty, that means it’s sandy; if it feels slimy, it’s clay. Another method is to take that handful of soil and roll it into a ribbon in your hands, just like you used to do with modeling clay in kindergarten: if you can dangle the ribbon vertically without it breaking, that means your soil is mostly heavy clay. If it forms into a ribbon but breaks when you dangle it, it’s probably only partially clay. If you simply can’t roll it into a ribbon, it’s probably mostly sandy soil.

Even if they manage to germinate, most plants suffer and die when their roots are subjected to wet, soggy conditions. This is one of the problems with heavy, clay soil: because it is so dense, it doesn’t allow for easy water drainage. Clay soil also gets compacted easily—when trampled by people, animals, or machines—which just makes matters worse.

At the other end of the spectrum, sandy soil has a lot of air particles between its grains of sand, which allows water to drain through it easily, which should, theoretically, make it conducive to growing plants. . But, in reality, sandy soils don’t retain nutrients and can dry out too quickly, which means they’re less than ideal for plant growth, as well. So if your soil is either too sandy or has too much clay, you need to fix it.

Bringing Your Soil up to Par

To make your sandy soil more absorbent, add organic matter such as compost, straw, shredded wood bark, etc. The coarser the material, the slower it will break down, which is what you’re aiming for.

By contrast, clay soil needs much lighter organic material worked into it, such as compost, sand, rock dust, or peat moss—and a lot of it. This must be a continual process over time, in order to effectively improve the soil texture and quality for the long run. Ideally, you would amend your clay soil in the fall, thus avoiding wet, spring conditions which makes the process more difficult.

In either case, sandy or clay, soil can also be improved through the use of organic mulch such as coarsely-shredded wood or wood chips. Also, depending on your region and climate, you may also want to consider planting winter cover crops to contribute additional organic material to the soil.

By the way, when growing plants from seed, you don’t need to add fertilizer until after the seedlings’ ‘true leaves’ appear. We will address this topic in a future post. In the meantime, we hope we’ve elucidated the concept of well-drained soil and it’s one less bit of lingo to puzzle over. Happy planting.