How to Garden › How to get Rid of Tomato Plant Pests Naturally: Focus on Tomato Hornworms – Part Four of a Series

How to get Rid of Tomato Plant Pests Naturally: Focus on Tomato Hornworms – Part Four of a Series 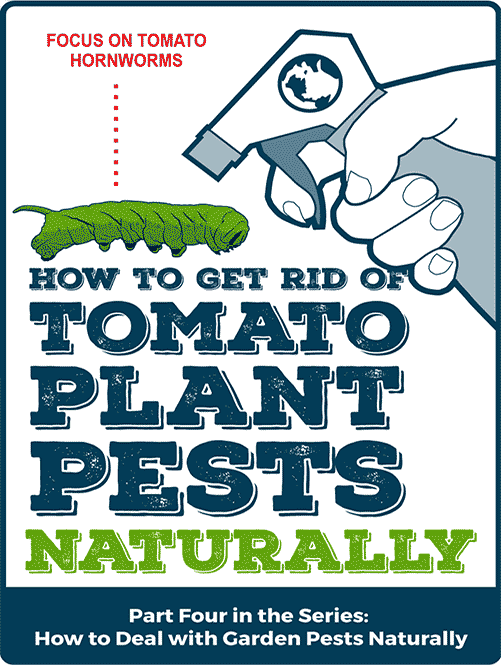 We dare say most vegetables gardeners are a bit obsessed with garden pests. Having had the distressing experience of their plants being unexpectedly ravaged by weather, disease or one or more of the many pests that prey on them, somehow, the demolition wrought by the latter always seems particularly galling. Discovering that your tender ministrations of vegetables from seed through seedling to hardy garden plant have all been for naught—because some marauding pests have eaten them as a midnight snack—can wreck your whole day.

One of the most dreaded universal pests, among the many that prey on tomato plants, are tomato hornworms which can wreak devastation in a matter of days, if undiscovered or left unchecked. Note that these ravenous beasts also favor pepper, eggplant, and potato plants. If you discover some of these formidable “monsters” in your garden, before reaching for an industrial strength commercial insecticide, we suggest taking a breath and consider a “non-nuclear” approach which may serve your interests better in the long run. 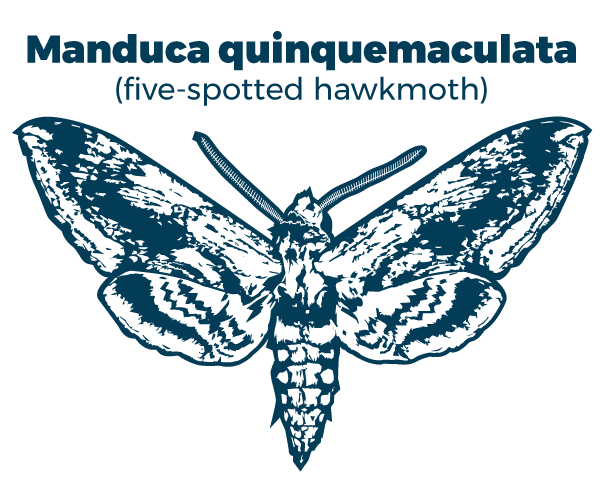 The problem with tomato hornworms is they’re hard to spot among your plants as Mother Nature has endowed these caterpillars of the five-spotted hawk moth with spectacularly effective camouflage. Much of the time, you don’t know they’re there until you notice defoliation of the top of your plants. Earlier signs include tan-colored droppings on the leaves. Keep an eye out for these droppings; when you spot them, search carefully through the foliage and you will find the source. Though you might feel foolish when you discover one of these ginormous caterpillars—how did you miss THAT?—don’t worry, you’re not alone. The simplest way to deal with these pests is to pluck them off and submerge them in a pail of soapy water. Or, feed them to your chickens, if you’re lucky enough to have any.

Watch out for Braconid Wasp Larvae 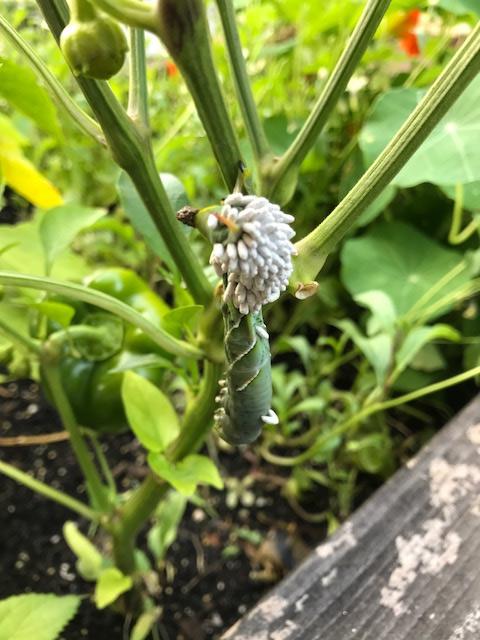 However, killing these buggers is contraindicated when you encounter them covered in nasty-looking white stuff, as we did recently (see accompanying photo). These are actually tiny white cocoons containing braconid wasp larvae. The braconid wasp is a natural predator of the tomato hornworm. As its progeny transforms from pupal to insect stage, it eats the insides of the hornworm until it dies. Braconid wasps are beneficial to your garden, in general, which is a good reason to let nature run its course.

As cool as it is witnessing nature’s checks and balances in action (or, as some of us know it, Karma), most gardeners would agree that it would be better to avoid having these pests in the first place. To prevent infestation, you need to interrupt the hawk moths’ lifecycle. They overwinter in the soil as pupae and emerge as moths in the late spring when they deposit eggs on the underside of leaves. The pupae can be destroyed by tilling the soil after harvest.

Going forward, keep an eye out for large hawk moths (also called sphinx moths) hovering like hummingbirds in your garden. To find their larvae, look for black droppings on the leaves and then spray the plants with water—that will disturb the caterpillars, giving away their presence, allowing you to pluck them off before they embark on devouring your vegetable plants.

Growing Tomatoes is Worth it 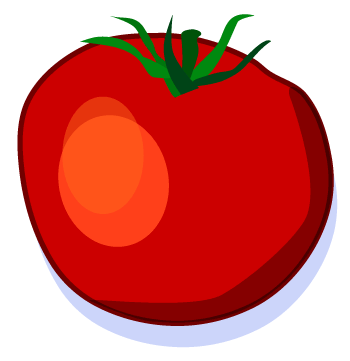 As tedious as it is doing battle, year-after-year, with various garden pests, it’s worth the effort. After all, for many, there is a short list of foods that beats homegrown summer tomatoes for sheer deliciousness. Actually, we suspect that many vegetable gardeners got their start in an effort to produce their own plentiful supply of these mouth-watering delights. Right about now vegetable gardeners should be in nirvana: it’s tomato picking season!